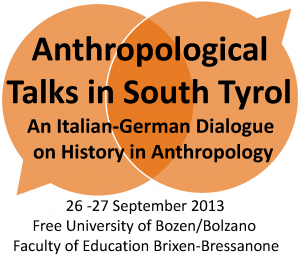 Andre Gingrich is a socio-cultural anthropologist with specializations in the history of anthropology, the Middle East and Central Europe, and qualitative methodologies. He is a member of the Social Sciences committee at Science Europe, and a member of the Royal Swedish Academy and of the Austrian Academy of Sciences (AAS), where he also directs the Institute for Social Anthropology (ISA). His fieldwork experience covered Syria, Saudi-Arabia,and the Yemen. His co-authored book “One Discipline, Four Ways” (Chicago University Press 2005, with Fredrik Barth, David Parkin, and Sydel Silverman)also was published in Italian, Spanish, Chinese, and Polish translations.

Alice Bellagamba is Associate Professor of Cultural Anthropology and African Studies at the University of Milan-Bicocca. She is the author of Ethnographie, histoire et colonialism en Gambie (Paris 2002),  L’Africa e la stregoneria. Saggio di antropologia storica (Roma 2008) and coeditor with Sandra Greene and Martin Klein of African Voices on Slavery and the Slave Trade (Cambridge 2003) and of The Bitter Legacy. African Slavery Past and Present (Princeton 2013). She was Alexander Humboldt Fellow at the University of Bayreuth (2004-2005) and EURIAS senior fellow at the Institute for Advanced Studies of Berlin (2011-2012). Currently, she leads a ERC project on the comparative study of post-slavery societies in Africa, the Indian Ocean and Central Asia.

Dieter Haller  is cultural and social anthropologist, he is Prof. of Social Anthropology at Ruhr-Universität-Bochum, Germany. He has taught as Professor in Frankfurt/Main (2000), Hamburg (2001), Granada (2002), at the University of Texas/Austin (2003-2005) and as Theodor-Heuss Lecturer at New School University/New York (2003). His main fields of interest are port cities, borderlands, diaspora, ethnicity, Gibraltar, Spain, and the Mediterranean. His latest publications are a monography on Gibraltar (Gelebte Grenze Gibraltar, Wiesbaden: Deutscher Universitätsverlag 2000), on Corruption (coedited with Cris Shore, 2005), an introduction into Cultural Anthropology (DTV-Atlas zur Ethnologie, München, 2005)

Josephus Platenkamp is Full professor of social anthropology at Westfälische Wilhelms-Universität Münster. He take part in a joint project of German and French scholars (funded by DFG and ANR) focusing on the ‘localisation of world religions in Southeast Asia and beyond’ and the emergence of ‘religion’ as a distinct category of thought and action. His contribution is a historical-anthropological one, addressing the question to what extent the introduction of Christianity to societies in Halmahera has deprived the local exchange systems of their originally communal cosmological foundations, so as to result in the emergence of mutually exclusive socio-political identities conceptualised in terms of Christian and Islamic ‘religion’ (agama).